There was no birding today so nothing new for the list.  But I did drive from Wales to Swanage in Dorset and went for a walk along the beach . . . as you do.

But before I go on about Swanage, there is Wales.

Unfortunately it rained for much of my time in Wales and the birding was not so great but Wales is a lovely place with lots of forests and little villages.

The hostel where I was staying was located in Llanddeusant, situated in the Brecon Beacons National Park.

This hostel was once a pub for shepherds. It provided a place to stop whilst moving flocks of sheep over the mountains. It was built in 1789 and inside the layout was not great, it was noisy but comfortable. My accommodation in Swanage is much better but first let’s look out the window at Llandeusant.

Despite the Welsh rain, I walked to a nearby Red Kite feeding venue. Apparently the Red Kite population was down to a hand full of individuals in Wales but a guy called Mr Powell started feeding the Kites daily and numbers have increased. Mr Powell has passed away so more recently a Taxi Driver took it upon himself to leave Manchester and became the feeder of  Red Kites.

A lucky shot with a Red Kite flying past whilst meat is being dispersed.

I did visit a RSPB reserve nearby, (Gwenffrwd-Dinas) and whilst it was lovely, it constantly rained and there were not many birds. I must be getting close to driving 1,000 km in the U.K. and I have partially worked out my own road classification system.

Motorways of which I don’t have a picture, but they are wide with many lanes and are fast.

Then country roads which have a speed limit of 100 km per hour. They are not so wide and don’t bypass villages. This can make traveling time slower than in Australia.

And then there are the smaller local roads on which you cannot easily pass other cars and in summer and spring the vegetation is thick and lush. They are more like an Australian driveway than a road.
Now Swanage,

A coastal town which is a little more upmarket than Scarborough and today being Sunday, had lots of tourists.  Their sand is whiter than Scarborough but it is imported and is being protected with many groynes. Not they groins located between the legs of footballers but thick wooden fences to stop sand moving away from where it’s wanted. 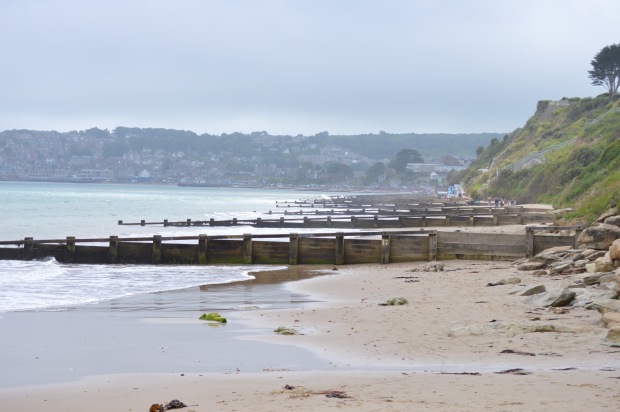 Swanage is located in Dorset and there are chalk cliffs at the interface with the ocean.  I’m guessing these are the same kind of white cliffs associated with the White Cliffs of Dover but I’m no expert.

There are fossils of shells which can be easily found in the chalk boulders.

Before we leave Swanage, they have some interesting signs. Next time I travel I’m going to take more photos of signs.

This beach is not all that dangerous but I guess kids in the UK can’t swim that well.  Poor little blighters.

Below is a charming area to have a picnic and I was about to lay down the blanket, break out a bottle of wine, cheese and crusty bread.  I particularly like the spot between the weeds and the steel steps but alas I couldn’t. 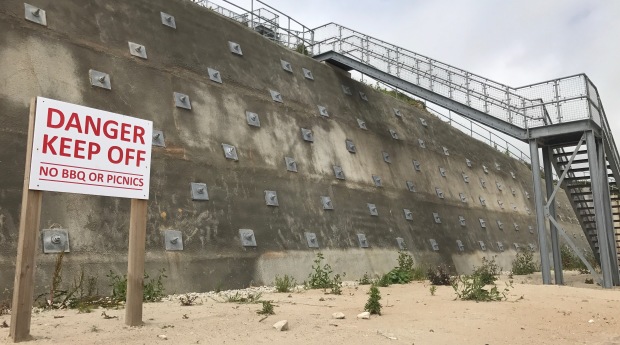 Below is a sign I saw at Minsmere. I find the image of a dead person rather gruesome but I’m sure it’s effective.

Back to birding tomorrow at the RSPB Arne Reserve.