My sleeping cycle is still a bit off, so I was up early again today.  Having a room mate who sounded like a muffled chainsaw in the bunk under me doesn’t help.

I have one more night of dorm sleeping and then the rest of the trip is a room for me only. 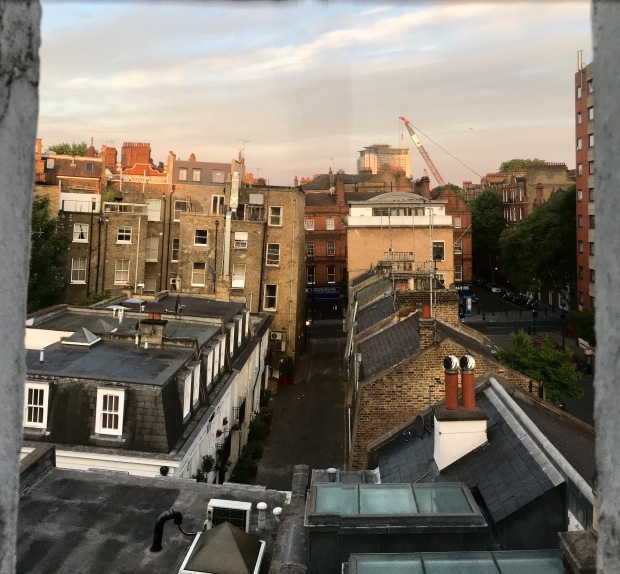 My last two nights at London finds me on the third floor of the Earl’s Court YHA.  Above is the view from this morning around 6:00 am, panoramic using my iPhone, hence some of the buildings are on a slant.  I think that’s the reason.

I easily found an uber person after having a coffee from a nearby Starbucks.  The driver works full time as a bus driver but he’s young and wants to learn a trade. I really do like uber. It’s so easy to use.

The guy at the top of this monument should have learnt a trade as well. Then he may not have lost an arm fighting for God, King and Country.

I love the lions at the Trafalgar Square monument, but in the photo below I kept the empty yogurt tub in shot. It is as it is. 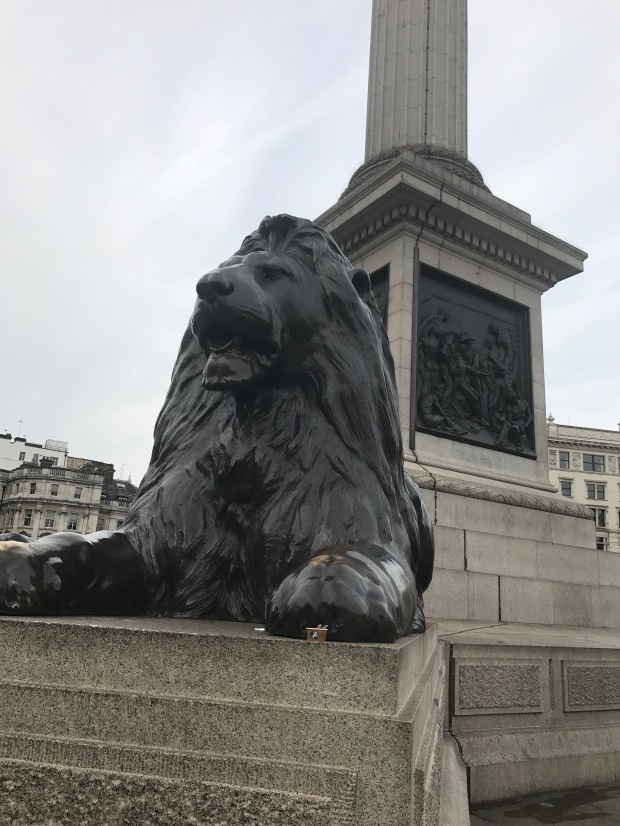 It’s hard to believe I actually stood at Trafalgar Square and just quietly, I love the shot below. With Big Ben in the background I kicked a goal in the first quarter of the day.

Those of the hand full of readers to this blog would appreciate my love of politics. Seeing the English Parliament building was very cool but considering there is an election in a week, I’m surprised there is not more happening. 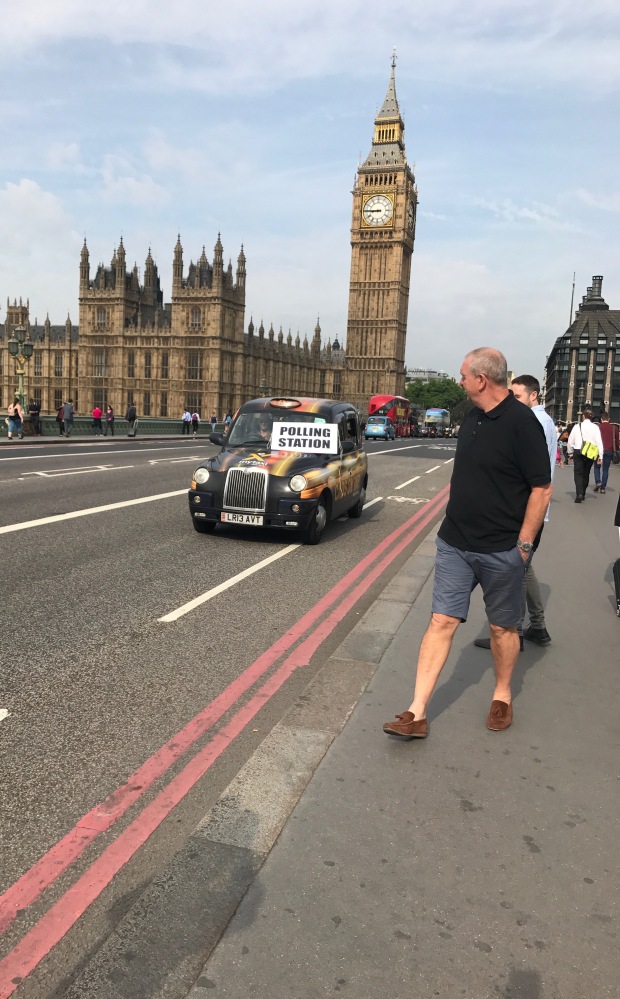 The taxi above is not moving and was carefully positioned for this shot. There were a number of photographers there but I managed to squeeze in and get mine.

I have no idea what it’s about.
The interesting thing about getting up early for a stint of “tourism” is seeing the locals working or commuting past the attraction. Below are some shots of people and surprisingly many cyclists travelling past monuments and significant structures without a second thought.

You may be able to see the number three on the traffic light  above the white van. This is to warn the pedestrians how much time they have remaining to cross. It’s a good idea and would work well in Melbourne.

For those of you who know central London, there is a church called Westminster Abbey nearby the Parliament. It’s very old and full of dead people. It’s a fascinating place with a log of religious fashions and take overs.  A chronical of middle aged white men wanting to maintain their authority.

It’s a bit sad for those who hold their religious ideals close as outside there is a carnival of tourists taking photos of each other or themselves nearby a place of worship. However, the people who manage the church are doing well. You can even by a coffee or souvenir in their specially designed shop.

I’m far from religious but I’m very grateful I was told. . . nay, almost directed to see it and enter.

A couple of more general photos within London just because. 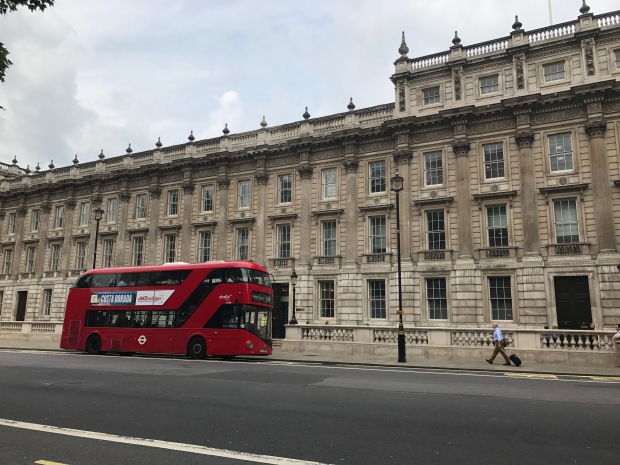 I love the drab sandstone bricks against the bright red bus.

It’s nice of the English to recognise Mahatma Gandhi with a statue despite having ruled his country and people for so long. 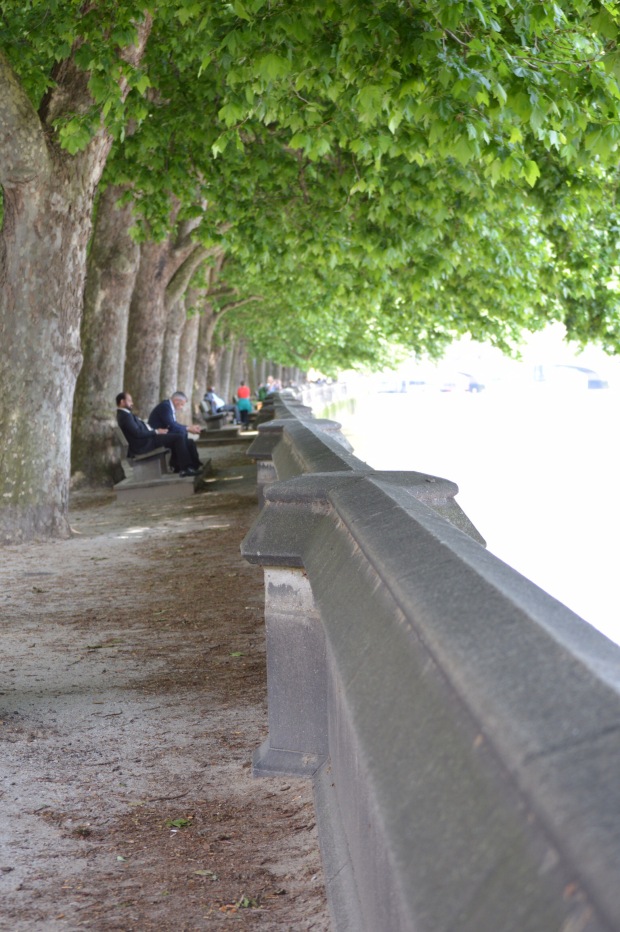 And finally. . . . a peaceful moment along a waterway, the river Thames.  Waterways are the same the world over. They flow down hill, usually into an ocean and they attract people to sit and contemplate.

Tomorrow I catch a train to Ipswich and pick up my rental car.