From watching hours of television as a child, I had a vision of an English forest.  Today I saw one and liked it. Minsmere reserve has a small patch of forest with meandering trails. It also has a Canopy Hide, the first I have seen.

But first, the view from my window.

It’s not a great picture but it’s the best I could do considering the small window and nearby clutter.  Once again I was using my panoramic setting on my phone.

The Blaxhall YHA is very clean and organised. The managers have been here for several years and it all runs like clockwork. I will miss it.
Before my English forest experience, I visited Dunwich and the Dingle Marshes. Apparently Dunwich had quite a history and was a large port which was lost due to coastal erosion. I guess that’s climate change for you, although it was in the early 1200’s, (I’m expecting a comment Rob).

I managed to add Kestrel to my current list of fifty eight bird species at the Dingle Marshes.

Australia has lost a large amount of its forests when compared to what it had before European settlement but England has as well – only it would have been much earlier. I’m no expert but one could speculate that nearly all the English forests were exploited for building ships and housing at some stage and much of what is seen now are plantings or natural regrowth.

The forest at Minsmere is home to many birds but it does not have the same diversity as one would expect in an Australia forest. However the Canopy Hide is a great way to get up high in amongst the upper branches of the trees.

The structure itself is very solid and fits in relatively well.

Inside the hide one could sit for long periods. It’s rather quiet up there in the canopy and if you manage to be there alone, as I was . . . it’s wonderful.

Lastly I would like to quickly touch on the English country side and it villages.  Tomorrow I’m travelling from Blaxhall to Scarborough, which is around 420 km, (much to the horror of locals) but most of it will be on the A1.  Once you’re off the motorways the roads are very narrow, the villages small as are houses.

I’ve taken some shots in this region and I expect to take more as I travel further.

The Blaxhall pub. I had a drink there today. Small, comfortable with a mixture of English accents.

Some of the local houses in Blaxhall early this morning. They are neat and maintained. 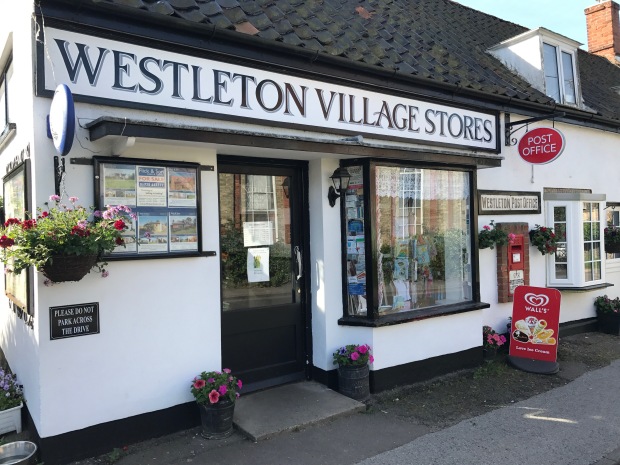 And a post office/general store on the way to Dunwich this morning.  I took this for Pam.

I haven’t seen many families with three or more kids in these little houses and I don’t expect to. Young couples or baby boomers buying a weekender is common. Blaxhall is in an “Area of Outstanding Natural Beauty (AONB) and has many planning regulations to protect its vibe.

However, my trip is still young and there is much more to see.

2 thoughts on “See the forest for the trees ”